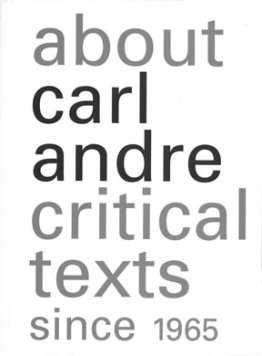 The 40-year career of radically minimalist sculpture and poetry of Carl Andre, one of the major American minimalists of the 1960s, is often compared to contemporaries like Robert Morris and Donald Judd. This dynamic collection of essays and exhibition reviews charts the gradual evolution of consensus on the meaning of Andre’s art among the most influential art historians and critics of our time. Contributors include Clement Greenberg, Donald Kuspit, Lucy R. Lippard, Robert C. Morgan, Barbara Rose and Roberta Smith; some of the essays appear here in English for the first time. An indispensable anthology on one of the central figures of the minimalist movement.