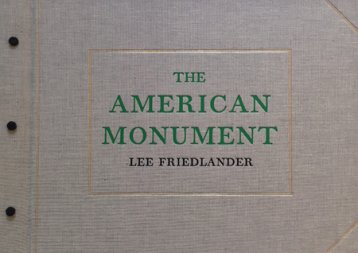 Originally published to great acclaim in 1976, The American Monument has become one of the most sought-after photography publications of the 20th century. Long out of print, this second edition is once again available again for all to enjoy and own. Published in the same oversized format as the first edition—with exquisite duotone reproductions of the original 213 photographs—the album of post-bound single sheets can easily be disassembled for display. Considered by many, including Friedlander himself, to be one of his most important books, The American Monument has influenced generations of photographers, curators and art historians. The second edition includes the original essay by Eakins Press founder Leslie George Katz along with a new essay by eminent past NYC’s Museum of Modern Art’s photography curator and Friedlander scholar Peter Galassi, which illuminates the history and continued significance of this iconic artist and this early publication. The deeply influential American curator of photography at MoMA during the 1960s-70s, John Szarkowski (1927–2007), stated: “I am still astonished and heartened by the deep affection of those pictures, by the photographer’s tolerant equanimity in the face of the facts, by the generosity of spirit, the freedom from pomposity and rhetoric. One might call this work an act of high artistic patriotism, an achievement that might help us reclaim that word from ideologues and expediters.” Lee Friedlander is the recipient of three Guggenheim Fellowships as well as a MacArthur Fellowship. He has published more than 50 monographs since 1969, and exhibited extensively around the world for the past five decades, including a major retrospective at the MoMA, NY, in 2005.